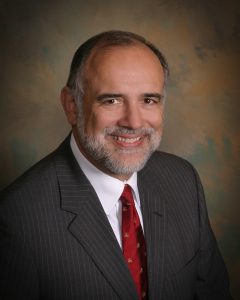 George E. Tragos is the managing partner of the Law Offices of Tragos & Sartes, P.L. He received his B.A. and J.D. from Florida State University.  Mr. Tragos holds an “AV” rating by Martindale-Hubble and is listed in Florida SuperLawyers, Florida’s Top Lawyers, and The Best Lawyers in America in both white collar and non-white collar criminal defense categories; he has also been selected by The National Trial Lawyers, as a Top 100 Trial Lawyer.  Mr. Tragos regularly teaches the Ethics of Criminal Lawyer at Stetson University College of Law.  He is listed in Who’s Who in the World, in America and in American Law.
He has served as Chief of the Felony Division for the State Attorney’s Office of Pinellas and Pasco Counties  and  Chief  of  the  Criminal  Division  for  the  United  States  Attorney’s  Office  Middle District  of  Florida.    He  also  served  as  Lead  Trial  Assistant  in the  Department  of  Justice  for  the President’s Organized Crime Drug Enforcement Task Force.  He has served as a Commissioner to the West German Government and represented the United States in the courts of Switzerland.  He is a Past President of the Florida Association of Criminal Defense Lawyers; Past Chairman of the Florida Bar Criminal Law Section , Past Chairman of the Florida Bar Federal Court Practice Committee,  Past  Chairman  of  the  Florida  Bar  Code  and  Rules  of  Evidence  Committee,  Past Chairman of the Criminal Procedure Rules Committee of the Florida Bar and currently is a member of the Executive Committee of the Criminal Law Section of the Florida Bar and is a member of the Executive Committee of the Florida Bar and a member of the Rules of Judicial Administration
Committee of the Florida Bar.  Mr. Tragos is a Board Certified Criminal Trial Lawyer and a past member of the 6th
Circuit Judicial Nominating Commission.  He is a regular lecturer for the Florida Bar and the American Bar Association in the area of Criminal Defense.
Mr.  Tragos  has  regularly  appeared  on  national  television  including  CNN,  Nancy  Grace,  Inside Edition, On the Record with Greta VanSusteren, Showbiz Tonight, and Fox News.  His practice concentrates on criminal defense in all State and Federal Courts throughout the country as well as catastrophic